Chicago has a storied history of welcoming Irish immigrants into its neighborhoods. Most famously, Chicago’s South Side has one of the largest Irish communities in the city. But the Irish-Americans are just as plentiful as the Italian-Americans throughout most of the city. 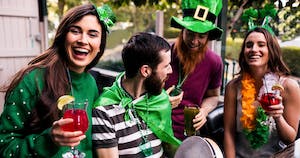 It’s no wonder this windiest of all cities has a St. Patrick’s Day Parade to rival even the most Irish of other cities in the U.S.

Nearly half a million residents and visitors flock to Downtown Chicago to watch the festivities. From parades to cultural events to bar crawls and history tours, there are plenty of ways to celebrate St. Patrick’s Day in Chicago.

One of the wildest parts of celebrating St. Patrick’s Day in Chicago is watching the Chicago River go from brown to green. Chicago has been dying the river green for St. Patty’s day since 1962. Spectators watch as the river flows from a natural rivery brown to bright St. Patty’s green.

At this point, you’re probably wondering how eco-friendly this bright-green dye is. Well, we can (somewhat) safely confirm that the dye is veggie based — not chemicals. The bad news? The eco-friendly dye wasn’t used until 1966 — which means an entire four years of chemical-based dyes were used.

The festivities start at 9 a.m. on St. Patrick’s Day. They commence with the sailing of six Plumbers Union members jumping aboard two vessels. Three of the six members are in charge of shaking the dye into the water with flour sifters. The remaining three members ensure the dye gets properly dissolved in the chilly water.

If you want to see the river run green you’ve gotta get up (pretty) early in the morning. The emerald hue only flows until about 2 p.m. After that, it’s back to basic brown again.

Runs and Walks to Start Your Day Right

If you need a way to ensure you’ll rise out of bed perky and bright, sign up for one of the many St. Patty’s Day runs or walks.

If you need a little extra oomph to get out of bed in the morning, you might want to sign up for the AMITA Health St. Paddy’s Day Half-Marathon. That’s right, folks. You can celebrate St. Patty’s Day by running just a little over 13 miles this year.

Or, if you’re not up for such a long run, you can always opt for the 5K, 8K or 10K runs that take place in Downtown and Deer Park. You can either run or walk any portion of these events. But you’ll want to head to the starting line anyway to pick up your bib and register.

After the river dyeing, the half-million spectators turn their attention to the Downtown Parade (after a hefty meal of corned beef and cabbage, of course!).

This three-hour parade starts at 1 p.m. and features Irish step dancers, marching bands and flag twirlers. The best part? The parade isn’t the only spectacle to look forward to. Residents show their Irish pride by showing up in kilts, green face paint and some really interesting leprechaun costumes.

The parade starts at Columbus Drive and snakes (pun intended) up the street to Grant Park.

There’s even a queen of the parade. Each year, the Chairman of the Downtown Chicago St. Patrick’s Day Parade announces the lucky Irish woman who will represent the community in the parade.

There are also parades held in Chicago’s South Side and Northwest Side. If you happen to reside in the suburb of Naperville, there’s a St. Patty’s Day parade there, too.

If you plan on celebrating the holiday as the local Irish do, you’ll want to find a few places to hide from the cold. Most of the Irish pubs in Downtown will be mobbed on the day, but the camaraderie, music and flowing beer will be worth squeezing into these small, dark spaces.

If you’re cool with heading further out to the burbs (or at least out of Downtown), you’ll definitely want to hit up Galway Arms, Chief O’Neill’s Pub & Restaurant, Mrs. Murphy and Sons Irish Bistro, Lad Gregory’s and Paddy Long’s.

In addition to the many parades and bar crawls going on in the city on St. Patrick’s Day, there’ll also be some cultural festivities happening all week.

The Irish American Heritage Center hosts a St. Patrick’s Day celebration that features traditional Irish music and dance as well as all your favorite Irish foods — and beer. The center also offers plenty of children’s activities. There will also be an Irish market with vendors selling all the arts and crafts your little crafternoon hearts could ever desire.

If you want to find a spot to celebrate the holiday at any time of year, head to Union Park to see the James Connolly Monument. James Connolly was the founder of the Irish Citizens Army and the Socialist Labour Party in the U.K.

Are you overwhelmed by the sheer number of activities celebrating Irish heritage in Chicago yet? Should you need a little more direction in your festivities (or just a few lads or ladies to befriend while celebrating in March), we’ve got the perfect solution.

Chicago’s Finest Tours runs a St. Patrick’s Day history tour every March. This tour is run for a limited number of dates (and only has a limited number of spots) each year. Discover all the secrets behind the green river, the city’s Irish heritage — and with all the Irish trivia you could ever hope for in between.

Send an email or take a look at our schedule to reserve your spots today.